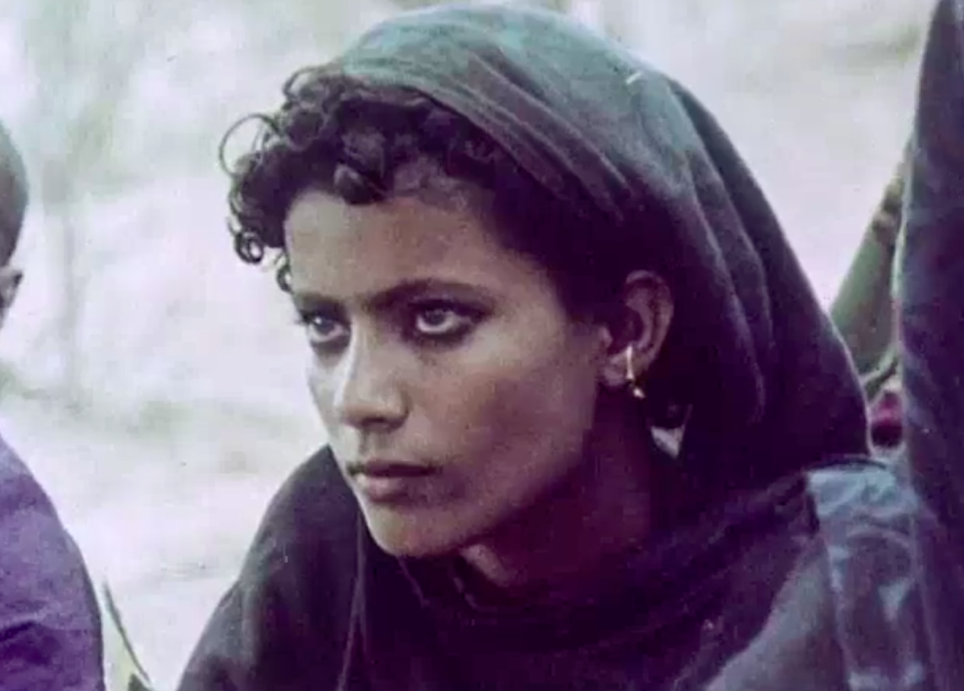 The first film by an Arab woman to be selected and screened at the Cannes film festival in 1974, Saat El Tahrir Dakkat (The Hour of Liberation Has Arrived) by Heiny Srour, chronicles the anti-colonial struggle of the Popular Front for the Liberation of Oman and the Arabian Gulf (al-Jabhah al-Sha'abiyah li-Tahrir 'Uman wa-al-Khalij al-'Arabi, PFLOAG). Recently restored by Nadi Lekol Nas,  Srour’s documentary closed the last edition of the Lebanese Film Festival and was recently screened in New York as part of a series focusing on the theme of decolonization in cinema.

The film’s opening sequence sets the stage by pitting the voices of a guerrilla choir against the crumbling remnants of the British empire, to which their song is unforgivingly dedicated. “The only possible dialogue with the occupier is the armed one,” goes one of the song verses, alluding to the limitations of diplomacy. Sounds of explosions and firing machine guns on a black screen precede still images of peasants, workers, students, armed men and women: the protagonists of the insurgency. The director then zooms out to contextualize the PFLOAG’s military campaign within the continuum of internationalist anti-imperialism. A shot of the map of the Mashriq, whose oil reserves were at the time owned for one third by Britain, frames the liberated region of Dhufar within the bigger geopolitical picture of the Gulf. Bordering on South Yemen, then a socialist republic, the southern Omani region was the epicenter of an emancipatory project that sought to liberate the whole Gulf from the yoke of Anglo-American colonialism. The latter relied on the complacent subservience of Arab despots happy to sell their countries and people to the highest bidder in an Anglo-Sultanic allegiance that remains in place to this very day.

Srour’s documentary depicts an armed struggle devoid of testosterone or muscular militarism, where every single aspect of society is patiently subverted. Land and water are collectivized, cooking is no longer the exclusive prerogative of women, and education is not just for men. Rather than religiously waiting for the fateful day of liberation, it is the practice of everyday life that is organically revolutionized. The fight against British neo-colonialism, patriarchal hierarchy, tribal divisions, Arab collaborationism, and cultural integralism is conducted collectively. Never is a single aspect considered or dealt with separately, something mirrored in the very narrative structure of the documentary, which is in fact devoid of individual protagonists. A polyphony of voices and stances coalesce into a mosaic where the very matrix of domination is questioned and dismantled. There is neither a cute, innocent child with whom the audience can sympathize and cleanse its conscience, nor a hero with whom to identify. There are no  cartoonish villains to moralistically simplify the structural nature of injustice. There is not even an ending, except the material one imposed by the film’s length, for however defeated and forgotten by history are the struggles chronicled inSaat El Tahrir Dakkat, they have lost none of their urgency and relevance.

Using archival footage, lyrical pamphleteering, and dialectic montage, the documentary retraces the recent history of a region transitioning, at the time, from a colonial outpost to, effectively, a protectorate. While their armies were in some cases still headed by British officers, Gulf monarchies and sultanates were granted nominal independence by their former masters in exchange for political loyalty, US Air Force bases and, of course, oil. But geopolitics are just the background of a revolt that actually deconstructed the binary, nationalistic simplifications that often emerge when two camps face each other. The political space of separatism in the film is problematized, for the PFLOAG’s fight was in fact aimed at both puppet Arab regimes and imperialist foreign powers. Srour’s documentary shows how proxy colonialism could not be possibly fought along strictly nationalist lines, but called instead for an internationalist approach able to resolve political issues not necessarily defined by ethnicity, tribe, or nationhood.

Debunking the Eurocentric presumption that systematically frames Arabs as prisoners of their own (backward) culture, the Lebanese director documents a struggle for self-determination that is at once political, sexual, cultural, and economic. The political planes along which the PFLOAG’s struggle moves intersect with one another and are never compartmentalized. Saat El Tahrir Dakkat’s narrative structure constantly weaves them together by moving from the wider, “impersonal” political context to the subjective and back. “We’re oppressed by multiple sultans: the father, the husband, the tribal chief,” declares a female freedom fighter whose remarks are echoed by one of her male comrades, who notes, “We gauge the profundity of a revolution by the degree it affects the condition of women.” Visually, this dialogical movement synthesizing the personal with the political is rendered through two distinct directorial choices. While the historical context is narrated by a voiceover, illustrated by archival images and long, establishing shots (of oil fields, institutional ceremonies, etc.), the popular uprising is recounted in first person by the women and men taking part in it. The camera moves closer to their faces to capture the intimacy of revolt, an all-encompassing sentiment directed outwardly against imperialist aggression and inwardly against the oppressive traditionalism that sultans and kings (propped-up by enlightened western democracies) enforce with the use of totalitarian force.

Though the rampancy of Western European and North American NGOs charitably “training” Arabs on all sorts of humanitarian matters seems to suggest otherwise, the fight against patriarchy, political oppression, and reactionary traditionalism is no foreign import. On the contrary, Saat El Tahrir Dakkatshows a collective, revolutionary subject able to identify the (economic, colonial, and cultural) roots of tyranny and oppose them on all fronts. Whether manifested in military intervention, familial abuse, tribal prejudice, or ethnic discrimination, oppression is unitarily fought by the members of the PFLOAG in the conviction that no single front should be left uncovered or prioritized. As documented in Abdel Razzaq Takriti’s book, Monsoon Revolution, during the ten years of armed struggle in Dhufar, between 1965 and 1976, slavery was abolished, new supra-tribal identities were introduced, and sheiks suppressed for the first time since the advent of Islam. Members of lower tribes and slave backgrounds accessed positions of leadership, modern technology, contemporary medicine, reading and writing were made accessible to the population.

Following the Hamrin conference in 1968, when the popular front adopted a more Marxist approach to the struggle that advanced from its nationalist origins to an internationalist perspective, the PFLOAG banned polygamy and female circumcision, equalized divorce practices, legalized inter-caste marriages and equality of inheritance. Pivotal in these successful struggles was the Bahraini feminist Laila Fakhro (Huda Salem), who Takriti refers to as an “exceptional woman flaming with beauty and youth” who interrupted her studies at AUB to join the revolution in September 1969.

While Srour’s film is a precious document protecting a vital episode of Arab revolutionary history from what E.P. Thompson calls “the enormous condescension of posterity,” its significance should not be reduced to functionalist propaganda or mere historical record. The film is in fact part and parcel of the revolutionary culture that emerged in Dhufar during the revolution. Suffice it to say that its very title was inspired by one of the most popular sung poems of the time, “The Hour of Liberation Has Struck.” Of the films that were produced on the revolution in Dhufar -- such as Sameer Nimer’s The Winds of Change, co-produced by the PLO, or Fua’d al-Tihami’s Down With Silence, backed by the Iraqi Cinema and Television Board -- Srour’s documentary remains the most prominent, though still criminally underseen. Srour was a PhD student at the Sorbonne, as well as a film critic for the anti-colonial magazine Africasia,when she was offered an interview in Beirut with a member of the PFLOAG. Recalling that interview, the Lebanese director remarked, “For the first time I was facing an Arab radical man who would volunteer to raise the subject of women’s distinct double oppression. And oh miracle, who explicitly wanted to stamp it out…”

Following that interview, Srour decided to go to Dhufar and lend her filmmaking to its people and their cause. In 1971, along with her French cameraman, they hiked 200 kilometers from the South Yemeni border into both the liberated and battle areas along the red line. When the camera broke down, they had to walk back to the border and borrow an “obsolete, primitive war camera” from the South Yemeni Minister of Culture to continue shooting. “Something pushed me to continue, despite all the challenges,” the director remembered, “it was the feeling that this was my revolution too.” Post-production was completed in London thanks to a solidarity network comprising the Gulf Committee, UK-based Yemeni workers, and people like Helen Lackner, Fred Halliday, and Fawwaz Traboulsi. After its world premiere in Cannes, the film was shown in Venice, at MoMA in New York, and though initially selected for the International Leipzig Documentary and Short Film Week and the Moscow International Film Festival, it was eventually withdrawn from both. Among the film’s many merits is what Abdel Razzaq Takriti called the “reconceptualization of the image of the revolutionary […] which in other contexts was typically that of a young man with long hair and a rough beard.” In Saat El Tahrir Dakkat, it is instead that of a “fatigue-wearing young woman with huge questioning eyes, sporting a short haircut and carrying a Kalashnikov.”