For all its scarred chaos, crammed slums, the death trap of Sabra and Shatila, Beirut
was beautiful: by night, clusters of amber bracelets, yellow diamond necklaces;
by day, a jumble of honeycombs, its bisque balconies, dun-gold apartments,
climbing the hills in sun-warmed hives I wanted to sink my teeth into,
my mouth a cradle for their bees. On the corniche, the black sea glittering
beyond the balustrades, I thought the city’s architects, as nowhere else,
had understood something about us ‒ our human proportions, desire
for shifting symmetry, plant-like thirst for light. In Beirut,
had given us a treasure so rare, it was almost a mirage.

The country was a fly-tip. The government wouldn’t even clean up
the miles of garbage lining the roads, stinking mounds of split black bags,
fly feasts of chicken bones, rotten fruit, foothills of dumped fridges, broken chairs
we drove past each day on our long hot way to meet the people warehoused
in plastic tents in the mountains, driftwood shacks by the beach, bomb-shelled
concrete blocks riddled with bullet holes and daubed with murals of keys.

Our one night out in Beirut, walking to the fish restaurant along the corniche
– a road cut into the edge of a cliff, especially one running along a coast ‒
we must have passed near it: that 2,750-ton stash of ammonium nitrate,
a white synthetic crystalline solid beloved of farmers, miners and the IRA,
plant food and potential explosive, cheap fertiliser of fury and grief,
which if improperly stored becomes a rock of dynamite ‒ when ignited
by a confined fire, combustive enough, it transpires, to marry a city. 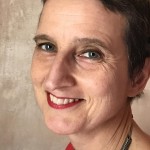 Naomi Foyle is a British-Canadian poet, science fiction novelist and essayist. Her many publications include the eco-SF quartet The Gaia Chronicles and three poetry collections including Adamantine (Red Hen Press, 2019). The co-founder of British Writers in Support of Palestine, she visited Lebanon in 2016 as a guest of the Muslim charity Interpal, an experience she first wrote about in the essay ‘Palestine and (Human) Nature,’ published in the Nature issue of Critical Muslim.