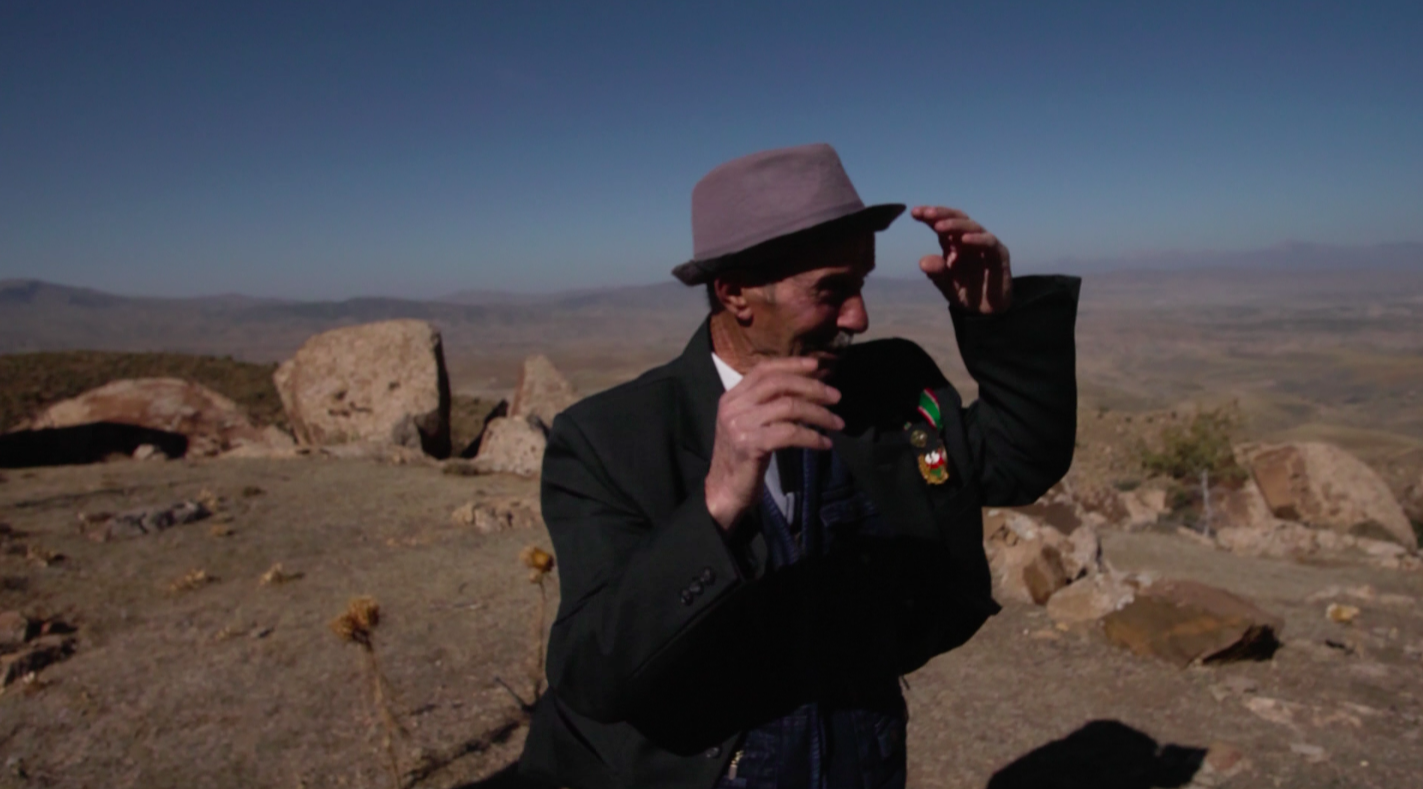 Still from "In Mansoura You Left Us"

A film review of In Mansourah, You Separated Us

An old man is standing. Behind him, large rocks are followed by a horizon with mountains covered in brown, ochre, and dark green. He wears a gray hat and a jacket that seems too large for his nervous body. On the jacket, we see military insignia, green and golden. He’s standing straight almost as if he were taking an official shot. The camera does not move. Suddenly, we hear the director’s voice, as she asks in French, “How come he survived and seventy-three others died?” The translator repeats the question in the Algerian dialect. As the voices outside the frame speak, the man’s body begins to shake, shoulders shivering from left to right. He responds that he’s been hit, and that he hid while his clothes burnt on his body. He stops and turns to the side, his shoulders and mouth in shudders, and then begins to weep.

History is fraught with unresolved emotions that store the visceral effects of time passing. Silenced histories and their affective traces are the subjects of the documentary film In Mansourah, You Separated Us (2019) by Dorothée-Myriam Kellou. The film’s premise is a father and daughter voyage, where Kellou goes back with her father Malek to his childhood village, Mansourah, in Northeast Algeria. As the film progresses, we come to realize that Mansourah is not only the site of a family’s past but a place where tragic historical events had unfolded. During Algeria’s war of independence, the French colonial authorities displaced more than two million people from rural areas such as Mansourah and grouped them into what they called “resettlement camps.” We trail the past, following the director as she unravels her father’s individual story, the memories of those displaced to Mansourah as well as the inhabitants who saw their village turn into a camp they could not escape from. Through Mansourah, the film weaves Algerian history with accounts of National Liberation Front (FLN) resistant fighters hiding in the mountains and sheltered by the locals, to diasporic flights out of Algeria after the war. The film also invokes the complications of the postcolonial present, where the memory of displacement has been erased from the national account of the war while young people from Mansourah long to leave the village.

In Mansourah, You Separated Us pries open the questions of what histories come to matter and what it means to recount them through a place. The film not only addresses an erased event of the Algerian war but also plays with people’s intimate and subjective memories of that period. In a way, the film does not attempt to tell history chronologically or with authority but rather foregrounds people’s emotional recallings, their silences, and traumas as central to our accounts of the past. If the history of Mansourah​​—and that of colonial displacement more broadly—have been forgotten it is perhaps because urban stories were easier to tell after Algeria’s independence. Urban spaces mirrored romantic aspirations on modernity: for the new, for what postcolonial utopian projects could look like, as represented in heroic films like The Battle of Algiers. In contrast, the history of rural Algeria, especially of Berber regions like Kabylia where the village of Mansourah is located, were often erased from nationalist tales because they meant acknowledging different identities and accounts where good vs. evil was harder to distinguish. 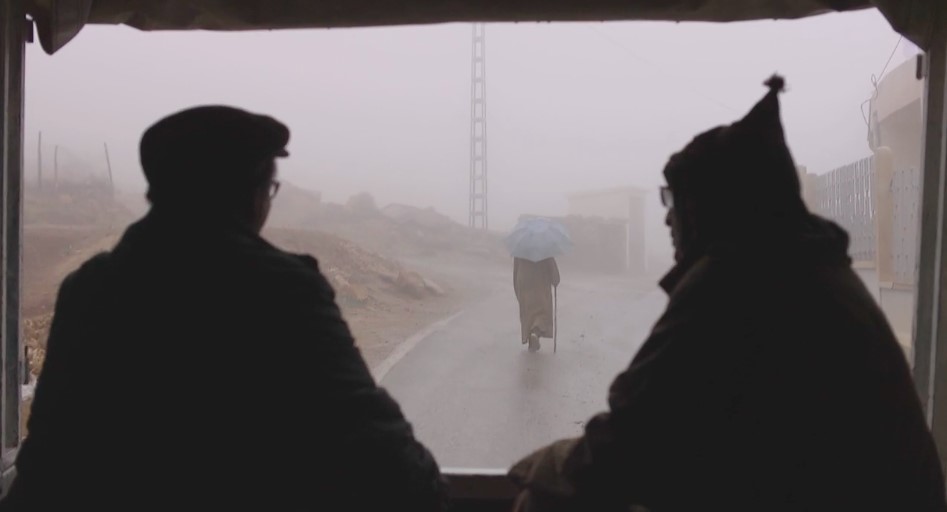 Still from "In Mansoura You Left Us"

The film excavates silences. Protagonists laugh, hesitate, shy away from the camera. We hear the director herself stumbling at times around the questions she’s asking in French and that her father, Malek, translates back into Algerian dialect, often modulating the meaning based on his own relationship with the person they’re speaking to. In this memory-work, intimacy is the instrument as Malek takes us around the places of his own past, like the room where he was once cramped with entire families of displaced people. In a scene in that room, he places a picture of his mother against the wall, as his fingers pass onto the uneven lime covering the walls. In that gesture, where the room becomes the conductor of memories, we witness both the impossibility of forgetting one’s past and the trauma of conjuring it.

Silence is necessary for the face of such war traumas. For the many elderly people in Mansourah, this might be the first time they tell their account of colonial violence. The director’s father himself, who is back in Mansourah for the first time in fifty years, confesses that this is a past he had never disclosed, even to his daughter.  Shaken with emotion, a man in his seventies recalls how at only five years old, he felt his world was ending when he heard that his father, a resistance fighter, was killed. Another man in tears still remembers the nightmares he had as a displaced child during the war. Intimacy, then, comes after years of silence and we begin to understand, through their voices, faces and shudders, how the displacement camps worked as open-air prisons, how people from the rural heartlands were packed together while the village was closed off by barbed wires (built by Algerian prisoners themselves) and surveilled by armed French soldiers.

The archives of the colonial past are presented in a fascinating way. Instead of being placed in the film in the style of a historical documentary, the archival footage is shown in the village itself, reflected onto a wall one night. Some of the elderly people watching these scenes might themselves be the children in the archives, taken by French soldiers away from their homes. An elderly man, in particular, stands facing the projector, eyes glowing. We watch these archives while also seeing contemporaries of Mansourah looking at the images, often for the first time. In this act of bringing back the archive to the village, we witness a kind of repair work where history is given back to the place it was first enacted.

Beyond the colonial past, In Mansourah, You Separated Us entangles questions of movement today by placing together stories of countless people like Kellou’s father who left for France after independence, that of those who left for Algerian cities, who stayed in Mansourah after being displaced, and who until today hope to leave the village. The father-daughter relation is central to the story. In the film, the father, Malek is broker, translator, and subject of the story at the same time. The father-daughter relation mirrors the generational gaps of the village where, for example, young children are stunned by the archival images of the elderly. The film reminds us of the possibilities of bridging generations through the work of memory. Relations are also kindled in translation, the father translating French to Algerian for his daughter. In a scene of the film, the director asks a question that her father doesn’t understand and asks her to repeat it again and again. For a moment, both of them become aware of the incommensurability between them, of the inability to breach between French and Algerian and between father and daughter. The slippages of translation mirror the affective slippages that have to be negotiated in familial relations, between generations, and across historical periods.

The documentary’s power also comes from the way it constructs a poetic visual and auditory world. The film’s cinematographer is no other than Hassen Ferhani, the renowned documentary filmmaker of quotidian Algerian life, who portrayed the blood-colored every day of an Algiers’ slaughterhouse in A Roundabout In My Head (2015) and the ethereal world of Malika and her coffee shop on the side of a Saharan highway in 143 Sahara Street (2020). Ferhani’s unique filming style, where fixed camera shots always seem to linger, and colors and light are carefully arranged onto the frame, is noticeable in this documentary too. As the villagers are watching the archival images at night, the camera captures their faces lightened by the projector while everything else in the village is covered in darkness. Through Ferhani and Kellou’s collaboration, a vibrant and proximate world is rendered, one that pushes away the archetypical romanticized shots of village life. The auditory landscape of the film enmeshes the sounds of rural life with the sounds of memory-work, as the film lets us into the hesitations in the speeches, the sighs, the tears, and the voices of a father-turned-translator and a daughter-director. The sonic atmosphere is attentive to the songs of Mansourah as well. In a scene of the film, for example, a man goes down a steep road on a donkey rocking from side to side as we hear a hoarse voice without any musical instrument that begins to sing. The song’s refrain is a single sentence repeated again and again: “In Mansourah, you separated us.”

Kellou’s film takes an ambitious project with a candid softness. Not only are there many films recounting Algerian history but the Algerian documentary scene, both diasporic and national, is extremely rich. Since the 2000s more specifically, Algerian documentary filmmakers have explored national memory of the colonial era (The Algerian Novel by Katia Kameli), of the recent past (Atal by Djemal Kerkar), and of diasporic returns and its misconceptions (Despite All Holidays by Malek Bensmail). Yet this film imposes itself because it reveals its mechanisms from the start: a father returning, a village, a silenced history. As we watch the director and her father arrive at Mansourah, we too seem to stumble upon the rocks of the landscape and the ones that make the ruins of old village houses.

The large dark yellow rocks that mark Mansourah’s architecture seemingly reappear throughout the film. They are in the walls where archival images are projected from, in the ruins of leftover homes, behind older men recounting their traumatic memories. In Mansourah, You Separated Us, oral history is centered yet the film also reminds us that materiality is a central function of this work of memory. In a scene of the film, a man guides the camera towards similar rocks, large and the color of darkened sand. He climbs upon them pointing his fingers towards different sides as he recalls where his family members were. These are ruins of his childhood home as we glimpse at its leftovers: four walls, half demolished. In the center are large rocks on top of one another. The rest of the house. The rocks in Mansourah are perhaps a metaphor for the ways certain places carry stories that extend beyond their enclosures. In the act of construction and destruction of camps, villages, homes, all that is left are ruins made of rocks and the memories of those who inhabited these very walls. 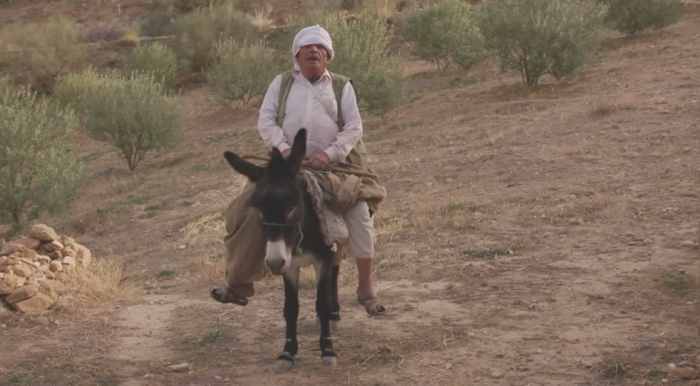 Still from "In Mansoura You Left Us"
Contributor 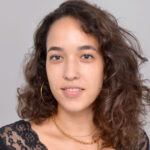 Myriam Amri is a Tunisian researcher, visual artist, and writer. Her research and creative practices investigate capitalist imaginaries and materiality in North Africa through analog photography, video art, and filmmaking. She is currently completing her first documentary film entitled “Turn at the Roundabout” and is a PhD candidate in anthropology at Harvard University.

<p dir="ltr">Myriam Amri is a Tunisian researcher, visual artist, and writer. Her research and creative practices investigate capitalist imaginaries and materiality in North Africa through analog photography, video art, and filmmaking. She is currently completing her first documentary film entitled “Turn at the Roundabout” and is a PhD candidate in anthropology at Harvard University.</p> <span id="docs-internal-guid-720accf1-7fff-31cf-3f40-d6928ad8e41a" style="caret-color: #000000; color: #000000; text-size-adjust: auto;"> </span>